Chronic Obstructive Pulmonary Disease (COPD) affects nearly 13% of adults in the United States, causing progressive lung damage and difficulty breathing when it goes untreated. Patients with this disorder have historically resorted to traditional treatment options such as steroids and inhalers. There may be an alternative method for managing the symptoms of this disorder. Please fill out a medical review form, or call our office in Glenview, Illinois at (844) 446 7827 to learn more. 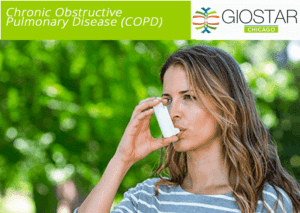 COPD is a chronic inflammatory disease that obstructs airflow from your lungs. Although there are several types of COPD, the three primary conditions are:

In some cases, COPD is inherited, but it is caused by smoking cigarettes in about 75% of all patients.

The symptoms caused by COPD include:

Patients with Stage 4 COPD (also known as End-stage COPD) experience severe airflow limitations. Simple tasks such as cooking a simple meal and taking a shower leave the patient out of breath and exhausted.  A patient’s lung function can drop to 30% or less. Stage 4 COPD is typically treated with corticosteroids, inhalers (bronchodilators) which will help open the airways. If you do have a severe flare-up you may end up hospitalized. COPD can be life-threatening and should not be taken lightly.

What is the Possible Role of Stem Cells?

Studies show that oral steroids may help improve overall breathing function, but should be used on a short-term basis. Steroids used over a long period of time can introduce side effects and pose added risks. Side effects include increased risk of diabetes, osteoporosis, cataracts, and a compromised immune system – thereby increasing the chances of infection.

Within the body, there are different sources of stem cells – known as the “mother” or “master” cells – capable of differentiating into virtually any type of cell. As a result, it may restore function to the lungs, may help to reduce the oxygen therapy and may improve the breathing abilities. It has been documented by several scientific publications that stem cells may differentiate into a specific cell or tissue type.